Today I had the chance to sit in on a panel featuring Chloe Bennet, star of the ABC showMarvel’s Agents of S.H.I.E.L.D.. I went into the panel not knowing what to expect from it. I have watched most of the show (though I admit to falling behind on the current season), but I am not familiar with any of her other work. What I found was an actress full of fun and energy, not afraid to speak her mind, and not afraid to cuss. She had advice for the young ladies, funny anecdotes from filming with the rest of the cast, and a less than subtle opinion about how the show should fit into the larger Marvel Cinematic Universe. Also, about halfway through, her boyfriend (Austin Nichols) crashed the panel and added a bit more to it. Below are excerpts from her hour long Q&A session. 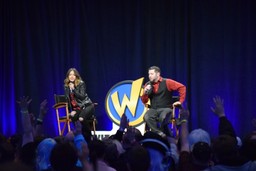 Question: I heard that you had a run-in with a pocket pet today?

Chloe Bennet: Oh, yeah! Did you guys see those little sugar bear things on the floor? Yeah? I held it, and it peed on me twice. It, like, peed down my jacket. I’m pretty sure that my arm still smells like sugar bear pee. You would think that it smells nice, like honey. But it doesn’t.

CB: That’s why I come to Iowa.

Q: Daisy is obviously your breakout role. Where do you see yourself in 15 years? Would you like to do other serious stuff?

CB: Yeah! I would. You know, it’s really fun getting to play Daisy and it’s going to be a sad day when I stop playing Daisy. I actually started out as an actress to do comedy, so I never meant to do… Like now I fight and cry every day, so it’s not necessarily what I wanted to do. But I love it. So I would love to do sort of comedy stuff moving forward. Also, Marvel and Disney are very main-stream. So whether it was some sort of indie film that’s more gritty, or that kind of thing. That would be fun to do as well. I would love to just be in Star Wars.

Q: One of my favorite friendships on the show is between Daisy and Gemma. What do you think Daisy thinks about Fitz-Simmons being a thing, officially?

CB: She is so down. I feel like off-camera, so many girly conversations happen between Simmons and Daisy talking about boys. I feel like there’s a whole other version of Agents Of S.H.I.E.L.D., where it’s just them talking about what happens on the show. But I think she loves it. I bet she’s like ” How is Fitz in bed?”, you know. They probably all talk about it.

Q: You mentioned that you feel like you are playing a different character than when you signed on to the show. You signed on to play a computer hacker. Did they break it to you after that, that you would have to learn fighting?

CB: Yeah, they did actually. They were like “We’ve seen you run, and you’re gonna need some training. Cause you can’t run in a straight line. (laughs) But they implied at the end of season 1 that the next season would be sort of an origin story. But they said “We’re going to put you in S.H.I.E.L.D. training for a week.” And I thought, well what’s that going to do? Make me sore for a week? So in between season 1 and season 2, I put myself through training on my own time. For about 6 weeks. And then I came back for my one week of S.H.I.E.L.D. training and they were like “You’re GOOD!”

Q: When you first learned that you were going to become Daisy, how did you get into character for a comic book character?

Q: With SDCC right around the corner, have you been preparing for a sequel to the dub-smash wars? Because I think you could take Haley this time.

CB: Well, Agent Carter did not get renewed, you guys! Which is kind of a bummer! I believe that she is on another show for ABC. But there is always the potential for a dub-smash. A Civil Dub-smash War, (You get it? Cause there’s a whole theme with this year.) within our show. Which could be cool. Of course, we all know who would win… That was really fun. It was just a way to cure boredom at Comic-Con, and it got really out of hand. All of a sudden, we were using production money to build wrecking balls. But yeah, you might see some of that. Keep an eye out.

Q: How does Daisy feel about Sparky (Lincoln) being un-able to use his powers?

CB: Well, now that Daisy is back at S.H.I.E.L.D., I think that you will see how she feels about that on Tuesday.

Q: If you could play any other character on the show, who would it be?

CB: Mac. He’s SO handsome. I just want to know what it’s like to have… His biceps are actually the size of my head. And his skin is SO soft. He is so handsome, I just want to , like, be him for a day. So, Mac.

Q: What do you hope to see for Daisy in the coming season?

CB: I can’t… Let me try to answer that question without ruing what happens in the finale. You will see at the end of this season… (this is SO hard) that there are some BIG changes within a lot of the people on the show. I can’t tell you whether or not I even survive this season. But if I were to, I’m sure things could get pretty crazy? I can’t talk about it. There’s probably like S.H.I.E.L.D. agents in these things. But this is a really, really tragic finale, so everyone will be different by the time that we finish the season. Just watch, this Tuesday, and bring a tissue box.

Q: What has been your favorite character moment as Daisy?

CB: There’s a fun, kind of classic comic book moment when me and Lincoln were out getting James (who plays Hellfire on the show). I quake the ground, and all the land mines go up. I was really excited about that because there is a lot of art of the original Daisy Johnson quaking the ground, and I had never actually done that. But I think that coming up, you will start to see Daisy’s powers evolving in a really fun way. And I think there COULD be something really cool in the finale.

Q: Are there any other Inhumans that you would like to see portrayed in the show?

CB: I really loved Yo-Yo. I actually thought that before I was Daisy Johnson, I might be Yo-Yo. I was so stoked to have her come on. And I think that her powers are so cool. Because she can go as fast and as far within a heartbeat. I think there is something very poetic about that, and I like it. But I am kind of, like, ready for Steve Rogers to make an appearance on our show. I’d be ok with that. And like, where’s Romanoff? Where’s the Avengers? Or maybe Robert Downy Jr. as Robert Downy Jr. That would be kinda nice.

Q: If Hive was such a threat, wouldn’t the Avengers get involved?

CB: I don’t know. People who make movies for Marvel, why don’t you acknowledge what happens on our show? Why don’t you guys go ask them that? Cause they don’t seem to care!

Q: If you could have one member of the Marvel Cinematic Universe on your show, who would it be?

CB: There is a lot that I would like to have. I wouldn’t mind a little visit from Thor. Like, what if Daisy had to date Thor? And they’d be like “You have to date Thor. On the show. And kiss.” Just kidding. My boyfriend is standing right behind me. Hi, honey. I love you! He is on the Walking Dead. That would be a cool crossover, right babe?

M: I was going to mention him earlier, but I didn’t know if I should acknowledge him?

CB: Come on out here and say hi. We met on the show, he played Miles. Come hang out up here.

Q: I know that your show does not interact with the Marvel Cinematic Universe. Do you ever see yourself crossing over into that world?

CB: I would love that. The Marvel Cinematic Universe loves to pretend that everything is connected, but then they don’t acknowledge our show at all. So, I would love to do that, but they don’t seem to keen on that idea.

Q: Will your character ever go by Quake?

CB: They have been waiting to introduce that. You may have to wait til Tuesday to see.

Q: If you could choose any character from a book to play, who would it be?

CB: Hermione. I actually wrote the studio (after they were already making the movies) and begged: Please let me play Hermione! It might not make a lot of sense, but I really got into acting a lot because of how much I loved Harry Potter. (Looking at Austin) How about you?

Austin Nichols: That is SO hard. What a hard question. I have so many favorite books.

AN: Ron? From Harry Potter? NO! There are centuries of brilliant literature to choose from here. And, no offense, I am not going to with something that came out in the last decade or two. I would choose J. Gatsby.

Be sure to catch the season finale of Agents Of S.H.I.E.L.D. on ABC this Tuesday!