Before the war, Tolkien was part of the TCBS (Tea Club and Barrovian Society): a club of four cultured and ambitious young men. According to one of them, G.B. Smith, the TCBSians wanted the members of the club “to leave the world a better place than when they found it, ‘to re-establish sanity, cleanliness, and the love of real and true beauty’” (Garth 253).

C.S. Lewis writes that our problem is not that we desire too much, but that we desire too little:
.
Indeed, if we consider the unblushing promises of reward and the staggering nature of the rewards promised in the Gospels, it would seem that Our Lord finds our desires not too strong, but too weak. We are half-hearted creatures, fooling about with drink and sex and ambition when infinite joy is offered us, like an ignorant child who wants to go on making mud pies in a slum because he cannot imagine what is meant by the offer of a holiday at the sea. We are far too easily pleased.
.
https://inklings-studies.org/wp-content/uploads/2015/03/02_jis_3-1_apr_2013_ordway1.pdf
Clique para ampliar...

If the incarnational aspect of Heaven is difficult to convey effectively in a story, the infinity of Heaven is surely even more difficult to represent. It is in this aspect of the representation of Heaven that Lewis and Tolkien most radically open up our vision of Heaven through their choice of imagery. To begin with, Lewis
and Tolkien make their depictions of Heaven literally open-ended; there is no physical boundary to either Niggle’s country or the new Narnia. But even more powerful is their use of metaphor to evoke infinity. The twin metaphors of journeying (especially in ‘Leaf by Niggle’) and reading a story (in The Last Battle) not only present a powerful image of the infinite extent of Heaven, but also evoke desire for it.
.
https://inklings-studies.org/wp-content/uploads/2015/03/02_jis_3-1_apr_2013_ordway1.pdf
Clique para ampliar...

In Lewis’ essay ‘Transposition,’ written a number of years before the Chronicles, he acknowledges that the direct experience of the Beatific Vision would be an infinite good, outweighing all other considerations. However, he notes that apart from the experience of the great saints, ‘the conception of that Vision is a difficult, precarious, and fugitive extrapolation from a very few and ambiguous moments in our earthly experience.’
.
The direct experience of the Beatific Vision is beyond words to describe, and as a result, words are certain to fail in the attempt, as indeed Dante’s words fail; beautiful as the image at the end of the Paradiso is, it is hopelessly inadequate to convey the relational richness of the Trinity. Faced with this difficulty, both Lewis and Tolkien look to Christ for the resolution.
Clique para ampliar...

Now he had a secret which only Patrasche knew. There was a little out-house to the hut, which no one entered but himself—a dreary place, but with abundant clear light from the north. Here he had fashioned himself rudely an easel in rough lumber, and here on a great gray sea of stretched paper he had given shape to one of the innumerable fancies which possessed his brain. No one had ever taught him anything; colors he had no means to buy; he had gone without bread many a time to procure even the few rude vehicles that he had here; and it was only in black or white that he could fashion the things he saw. This great figure which he had drawn here in chalk was only an old man sitting on a fallen tree—only that. He had seen old Michel the woodman sitting so at evening many a time. He had never had a soul to tell him of outline or perspective, of anatomy or of shadow, and yet he had given all the weary, worn-out age, all the sad, quiet patience, all the rugged, careworn pathos of his original, and given them so that the old lonely figure was a poem, sitting there, meditative and alone, on the dead tree, with the darkness of the descending night behind him.

It was rude, of course, in a way, and had many faults, no doubt; and yet it was real, true in nature, true in art and very mournful, and in a manner beautiful.

A mist obscured Nello’s sight, his head swam, his limbs almost failed him. When his vision cleared he saw the drawing raised on high: it was not his own! A slow, sonorous voice was proclaiming aloud that victory had been adjudged to Stephan Kiesslinger, born in the burgh of Antwerp, son of a wharfinger in that town.

When Nello recovered his consciousness he was lying on the stones without, and Patrasche was trying with every art he knew to call him back to life. In the distance a throng of the youths of Antwerp were shouting around their successful comrade, and escorting him with acclamations to his home upon the quay.
Clique para ampliar... 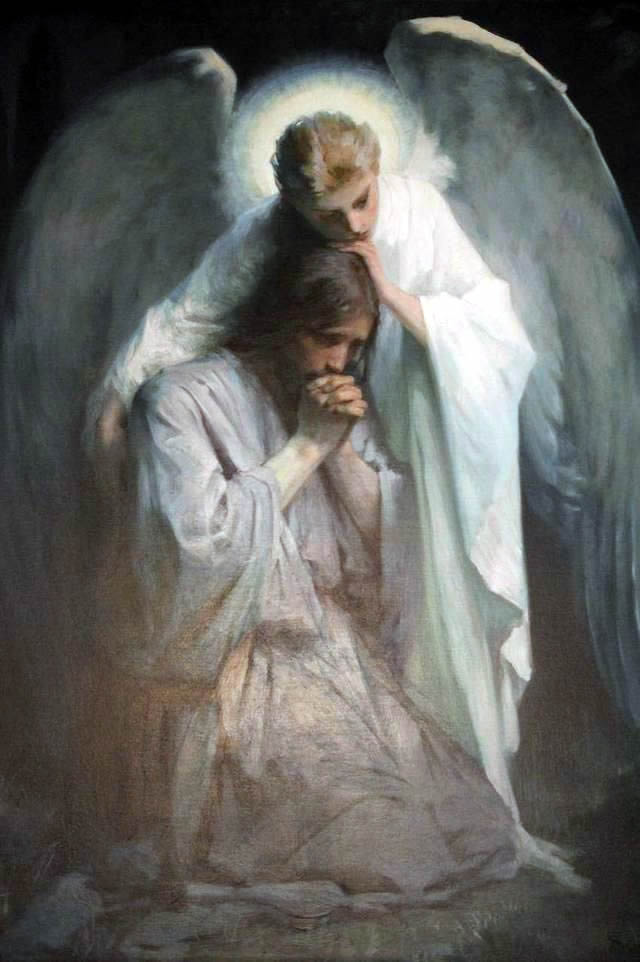 A imagem acima é "A Agonia no Jardim".