Luke is right: The Jedi SHOULD be abolished
The government has no place sanctioning religious combatants
By Ben Kuchera Apr 15, 2017, 9:00am EDT

Luke Skywalker understands one truth in the trailer for Star Wars: The Last Jedi, and it’s an important one: It’s time for the Jedi to end.

Luke’s not a misguided outcast who needs to be shown the error of his ways; he’s a wise teacher who knows there is no place for an order of religious zealots with next to no legislative oversight in a functional democracy.

You can talk about the balance of the Force as much as you’d like. No one is saying that you shouldn’t be able to meditate and build your own lightsaber. We’ve seen enough blasters to know that there is some galactic version of the Second Amendment in play here. If you want to carry a laser sword and be at peace with the galaxy? That’s fine.

The problem is when the government gives you what seems to be nearly unlimited authority to enact policy, with the implicit threat of cutting your hand off, reading your mind and using your own thoughts against you.

THE PRESENCE OF THE JEDI WILL ALWAYS BE A THREAT
The issue here isn’t that the Jedi exist, but the fact that they were made the religiously bound, official peacekeepers of a secular government, with the power to change the course of history itself. The wars that we see on-screen, the battles that cost untold carnage across space, are often the result of the actions of Jedi who are acting in the best interests of their beliefs, not the will of the people.

It’s important to remember that Qui-Gon Jinn was acting as an ambassador investigating a trade dispute at the beginning of A Phantom Menace. But you don’t send a Jedi to look into something without sending the clear message that the muscle is here. The presence of the Jedi themselves, even before they speak, is seen as a threat and escalates the situation.

Imagine what it’s like be going about your day, only to encounter a Jedi during your travels. You have heard stories that they can read your mind and force you to do things you don’t want to do. Blasters are worthless, because the Jedi can swat the bolts away with their laser swords. They have been given the blessing of the government to go where they’d like and kill if they feel the situation warrants it.

I’d be scared too.

And there is the grimmer reality that the Jedi don’t care about the great good of the people, but act unilaterally in service of their religious beliefs at the expense of law itself. Consider Qui-Gon’s discovery of slavery on Tatooine, a practice that is illegal and creates much human suffering as living souls are bought and sold like cattle.

But Qui-Gon also sensed a young slave named Anakin Skywalker may be important to his religious order, and ignored everything else in order to kidnap him from his home and mother. As the video below shows, Qui-Gon could have saved both Anakin and his mother from slavery, but it would have complicated both the immediate mission and Anakin’s later training.

Remember, Qui-Gon wanted Anakin not as a point of law, but because his religion indicated the child could be of some use. If Anakin’s mother had been part of the deal, his training would have been complicated by the attachment. Qui-Gon made the decision to leave her to a life of slavery and later murder after being resold in order to add another child to the ranks of his order. It’s repugnant.

The decision to leave the mother — not to mention the rest of the slave population of Tatooine — behind in order to begin Anakin’s training was based on cruel calculation, not empathy or justice. The end result in the short term was an escalation of conflict in the trade dispute, but ultimately Qui-Gon’s poor judgment led to the creation of Darth Vader himself.

When belief trumps logic, the entire galaxy suffers. Qui-Gon could have sent Jedi, or even just a battalion of soldiers, back to Tatooine to end the slave trade and free Anakin’s mother. This would have freed Anakin from the trauma of knowing his mother was still suffering, which was ultimately what pushed him to the Dark Side.

Attachment isn’t always a bad thing. Alderaan would probably agree that things would have been better if Anakin could have visited his mother on the weekends to avoid the creation of a planet-destroying despot.

IT GETS WORSE
This isn’t even getting into the “Jedi Mind Trick,” which robs people of their agency and allows the Jedi to control others directly, nor the strange mixture of Jedi and traditional soldiers throughout the Clone Wars.

What is the chain of command in the situation? If a Jedi were to commit a war crime, would the Senate have oversight to punish them, or would it be left to the Jedi Council? The idea that it’s possible to hold soldiers to one standard and super-powered true believers to another is absurd. These are children who were taken from their homes at a young age and taught deadly arts and a belief system before being given ultimate power over the lives of those they are supposed to serve.

The Jedi impacted the political climate of the entire galaxy, and at great cost to everyone else living there who don’t see the world in terms of Jedi vs. Sith. The Emperor didn’t rise to power because the Jedi trusted their religion, it happened because the Jedi were both powerful and open to manipulation.

The Jedi were damaged men and women who are tasked with executing official government policy, and in the Clone Wars fought with the government to maintain control of the systems that wanted to pull out. The line between keeping the peace and keeping people in line became blurry.

Life is about love and longing. It’s about experience and emotion. You can’t deprive a child of these things, teach them that their hearts are filled with dangerous attachments to those they love, and then indoctrinate them into your religion in order to act as “peacekeepers.” It’s a corrupt system that ended in ruin, and for good reason.

I’m sorry to have to tell you this, but the Jedi belong where they are right now: as legend.

The author of this piece would like you to know that while he agrees with these arguments politically, he still thinks the Jedi are completely badass and hopes that Rey and Luke spend two hours in The Last Jedi kicking 10 kinds of butt.

‘Star Wars’: Why the Jedi Were Bad for the Republic
Nick Cannata-Bowman
June 13, 2017

Before you break out the pitchforks and torches to defend the honor of the Jedi Order, pause for a moment to hear us out here. An additional warning before you continue on: This Star Wars critique will be supremely nerdy in every sense of the term, so buckle in. The thesis here is simple, and it’s that the Jedi were the driving force behind the complete collapse of the Republic (and the subsequent rise of the Empire to boot). Through a series of poor decisions, clouded judgment, and capitulation, the Order entrusted with the protection of the galaxy managed to fail on just about every front.

Don’t get us wrong: For a long time, the Jedi did a splendid job. Thousands of years of relative peace speak volumes to their effectiveness in the past, but all it took was a short series of mistakes to completely undo all their hard work. All it took was a civil war and a silent coup before virtually every Jedi in the galaxy was gone, and there’s one place you can point the finger for a number of reasons.

1. The Jedi essentially acted as an unregulated police force 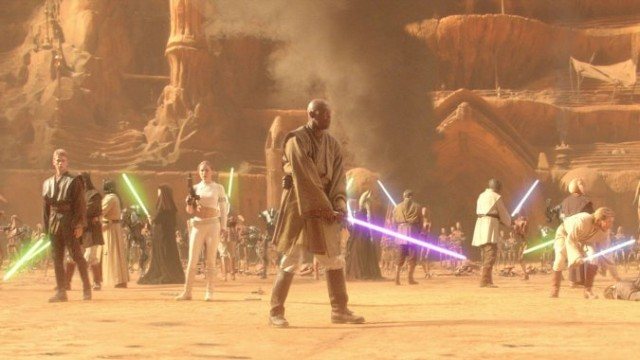 It’s no wonder the Senate believed Chancellor (soon-to-be-Emperor) Palpatine when he told them the Jedi had made an attempt to overthrow him. The Jedi operated outside the bounds of the law, and for the most part were answerable only to their own internal council. While still subject to the Chancellor’s will, for the most part the Senate had little to no insight into their inner-workings. By acting independently from the political system, they bred distrust among the very people they were expected to protect.

2. They took on military titles and responsibilities

You may remember Qui-Gon Jinn telling then-Queen Amidala in Episode I that despite the Trade Federation blockade and hostile takeover, the Jedi couldn’t fight their war for them. They of course then proceeded to help fight their war, and from there things only escalated in the Star Wars universe. Despite only being “peacekeepers,” we saw Jedi assuming roles as Generals within the Republic Army, embedding them conveniently within the very troops that would eventually turn on them. In the end, they became soldiers instead of peacekeepers, going against the fundamental values of their philosophy.

3. The Jedi tried and failed to play politics

In a lot of ways, the Jedi tried to have their cake and eat it, too. While existing outside of the political structure of the Republic, they still attempted to enter into a game they had no business in. In the Clone Wars TV series, we even see them go so far as to expel one of their own for the sake of maintaining the public’s favor. We see this occur over and over again, as the Order entered into a cat-and-mouse conflict they never stood a chance to win.

In Attack of the Clones, Obi-Wan Kenobi stumbles on a secret: That one of their own had commissioned a clone army from Kamino a decade ago. It didn’t take long before their hand was forced, as the clones became an integral part of keeping the Republic safe from the Separatist threat. That much is forgivable at least. Where the Jedi failed is in their follow-up efforts. There was no follow-up investigation on Kamino, no suspicion as to the source of the army, and a level of trust that never should have occurred. The sheer convenience of their appearance should have at least tipped someone off that something was awry. Instead, they ended up being the downfall of the entire Order.

5. The Sith ran circles around the Jedi for years

From what we know of the Sith/Jedi relationship, the Dark Side clouds the perception of even the wisest of Jedi Masters. Even so, we see examples throughout the Star Wars canon of Jedi being able to at least sense the presence of the Dark Side in an individual. Never once did anyone bother to suspect Chancellor Palpatine of being the most powerful Sith Lord in the galaxy, or of orchestrating the biggest long con in history. His coup was decades in the making, and he rarely even came close to detection by the Jedi. The result: Everything went according to Palpatine’s plan over the course of years, and the Republic crumbled in its wake.