1) Boba Fett and the Sarlacc
I'm not referring to the scene in Return of the Jedi, where supposed badass Boba Fett is accidentally knocked into the Sarlacc Pit by a nearsighted Han Solo. I'm also not referring to the standard fan belief that Fett was too badass to stay trapped in the Sarlacc, and escaped after the movie ended. No, I'm referring to the other completely separate time that Boba Fett fell into the goddamn Sarlacc, during the "Jawas of Doom" comic. After escaping it — well, being spit out, at least — an amnesiac Fett wandered through the Tatooine desert until he was picked up by the world's stupidest group of Jawas, who thought he was a droid. The Jawas' sandcrawler was then attacked by Han and Leia, in an attempt to rescue R2-D2, who the Jawas had also picked up somehow. after helping Han rescue R2, Fett suddenly remembered he hated Han Solo just in time for the Sandcrawler drive directly into the Sarlacc Pit. At least this time Fett had a pile of Jawas for company. 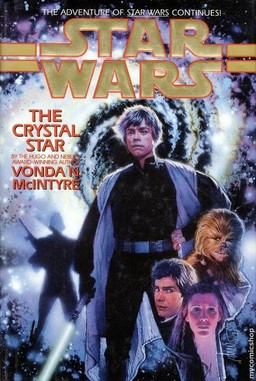 2) The Crystal Star
The most derided novel in the entire Expanded Universe, Vonda McIntyre's The Crystal Star includes both centaurs and werewolves (spelled "wyrwolves," because SCIENCE FICTION), and they stll aren't the dumbest things in the book. No, that honor would go to a surprisingly bitchy Luke, who — and this is all post-RotJ, by the way — joins a transparently evil cult led by a golden blob. The reason he does this — he's sad because he lost his Force powers because a sun died nearby, which is even more insulting than just joining a cult led by what is for all intents an purposes a Star Trek villain. Add the Solo kids gettign kidnapped for the umpteenth time and the millionth leftover rogue Imperial officer, and you have a book whose only distinguishing characteristics are its terrible ones. 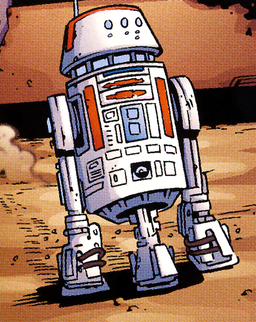 3) Skippy the Droid
First of all, his name is fucking Skippy the Droid. Second of all, supposedly Skippy is the name of the red R5-D4 droid from the beginning of A New Hope — the one that breaks down after Luke's Uncle Owen buys it, forcing them to take R2-D2 instead. In Star Wars Tales #1, it's revealed that R5-D4 is a droid that can use the Force, which he uses to keep drinks from spilling while he serves in Jabba's palace. Then he uses the Force to free himself and wander the Tatooine desert until Jawas pick him up, because apparently you can't walk 20 feet without being spotted by a sandcrawler on Tatooine. When Luke and Owen buy him, as per the movie, R5-D4 has a vision that unless Luke takes R2, the Rebellion will fail, Princess Leia will be killed, and basically the whole galaxy will be fucked. So he blows his own gasket and uses the Force to make C-3PO tell Luke to take R2 instead. Which is tremendously dumb, but still not as dumb as the fact he's named Skippy. 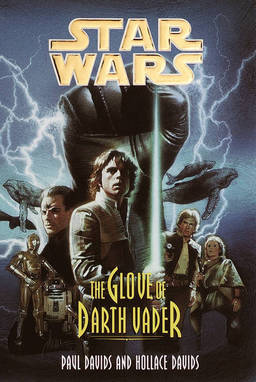 4) The Jedi Prince Series
Perhaps it's unfair to rail against the young adult Star Wars novels, but when they're as bad as Paul and Hollace Davids six-part Jedi Prince series, exceptions have to be made. Here is a brief list of just some of the many, many ways Jedi Prince sucks:
• The main character, Ken, is a collector of Star Wars toys. Yes, while he lives in the Star Wars universe.
• The Emperor has two sons who are both triclopses.
• Darth Vader's glove is magic.
• Luke Skywalker has to rescue whales, a la Star Trek IV.
Honestly, the only good thing about the Jedi Prince series is the reveal that Moffs hold Mofferences, which is so horrifyingly awful it comes out the other side to awesome. 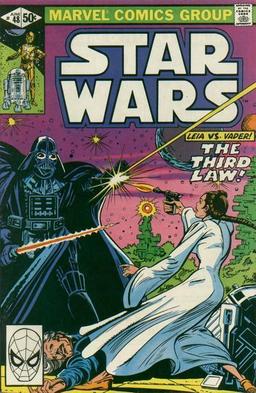 5) The Third Law
This very special Marvel comic (issue #48) hints at the Star Wars universe's future obsession with banking. a la the Trade Federation. Princess Leia and the Rebellion's Finance Minister — because rebellions totally have those, right? — head to a banking planet to get a loan to buy X-Wings. But Darth Vader is there and he wants to prevent Leia from getting a loan. I know you're at the edge of your seat, but bear with me. The planet has a rule about not carrying weapons, which Vader ignores to kill the finance minister. Except… the finance minister was a droid, because the real finance minister died months ago! Leia fooled Vader into order to get Vader to commit murder and piss off the natives and secure her loan! Except that Vader fooled Leia, because Vader didn't give a shit about the loan, he just wanted the Alderaanian crown jewels Leia put up as loan collateral! It's a ridiculous story that's somehow still tremendously boring at the same time. 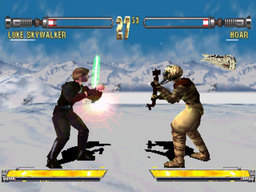 6) Hoar
The Star Wars: Masters of Teras Kasi video game was terrible for a lot of reasons, not least of which was the fact you had to perform a needlessly complicated move to either draw a lightsaber or pull a gun (note: if you're playing a fighting game, chances are you'd want to have your character holding his or her weapon rather than trying to take on Darth Vader with your goddamn fists). On the other hand, it did include a Tusken Raider named Hoar. If this doesn't strike you as completely hilarious, keep saying the name out loud until you figure it out. 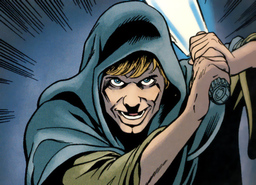 7) Clone Names
Although the Star Wars universe got fat-packed when clones in Episode II, it was hardly the first time clones has made an appearance in Star Wars. That honor goes to Timothy Zahn's Thrawn trilogy, in which an evil clone of a Jedi makes an evil clone of Luke Skywalker from the hand he lost on Bespin. It's actually a pretty solid idea until you learn that Luke's clone's name is Luuke… just like the clone of the Jedi Jorus C'boath is Joruus C'boath. Adding extra "u's" to signify clones is utterly shameful, and its even worse than Zahn tries to justify it with some "the cloning process makes clones accentuate their "u" sounds" bullshit. Seriously, no one could think of a better way to differentiate Luke from his clone? Even calling him FLuke would have been less terrible. 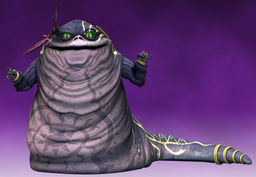 8) Star Wars: The Clone Wars Movie
Since the Clone Wars cartoon is actually pretty solid now, most people seem to have forgotten that it began with a movie, and that movie was terrible. It basically ignored everything fans wanted to see in the Clone Wars, and instead focused on Anakin and his new, obnoxiously spunky padawan Ahsoka rescuing Jabba; the Hutt's son Rotta, nicknamed "Stinky," who is for all intents an purposes a farting slug the size of a basketball. And what's worse is that Stinky isn't even the worst Hutt in the movie — that honor goes to Ziro the Hutt, Jabba's uncle and insanely terrible homosexual stereotype. Honestly, if it weren't for the Holiday Special, the Clone Wars movie might be the worst thing in the entire Star Wars EU canon. 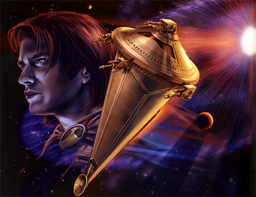 9) The Sun Crusher
Can a weapon be a Mary Sue? Thanks to Kevin Anderson's Jedi Academy trilogy, we know the answer is yes. The Suncrusher is a small ship with the ability to destroy entire star systems, thanks to its 11 "energy resonance torpedoes." It has a hyperdrive, indestructible armor, can withstand shots from the Death Star laser and is basically completely unstoppable — oh, and even the Emperor didn't know about it, because no one would have possibly been able to explain its existence post-RotJ otherwise. Thankfully, Jedi apprentice Kyp Durron (who stole it in the first place, but whatever) flew the damn thing into a black hole, as the only conceivable way Anderson could write himself out of the situation he'd created. 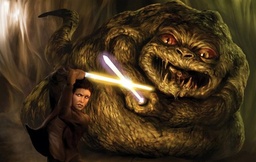 10) Bendorion
The Jedi are notoriously inclusive, but even they should have considered their hiring policies after naming Bendorion the first Jedi Hutt. Yes, it's a giant slug person who wields a lightsaber. Seeing as pretty much all Hutts are gangsters, it should be a shock to absolutely no one that Bendorion almost immediately went to the dark side, and took over a planet the Jedi had dispatched him to, forcing his subjects to call him ""Beldorion of the Ruby Eyes." That's bad, but what's even worse is that Beldorion was one of the countless Jedi who were somehow alive during the events of the original trilogy, back when Luke was supposed to be the last one, although Beldorion might be the stupidest. Leia, having the most experience killing Hutts, defeated Bendorion in a lightsaber duel in the book Planet of Twilight because, as the Star Wars Wiki explains almost passive aggressively, "Though the centuries old Dark Jedi was powerful, [Leia] Organa was able to move more freely and bisected the Hutt at the mid-section." Really? The giant slug with tiny dinosaur arms couldn't move as well as a human? Go fucking figure.


11) The Ewok Adventure and Battle for Endor
After the debacle that was the Star Wars Holiday Special — which Lucas has erased from even the Expanded Universe, hence its lack of inclusion on this list — George took control of his latter two made-for-TV Star Wars specials, and they sucked anyways. The Ewok Adventure and Caravan of Courage are closer to the Ewoks cartoon than the movies, so it's all about the Ewoks rescuing annoying moppets who have lost their parents and learning about trust instead of mercilessly killing the Empire's elite troops. Caravan of Courage is notable in that it adds Wilford Brimley to the mix of bland kids and toothless teddy bears. Believe it or not, Wilford Brimley is no Han Solo, and the combination of teddy bears, kids and obese old men was not the entertainment smash Lucas was likely hoping for. 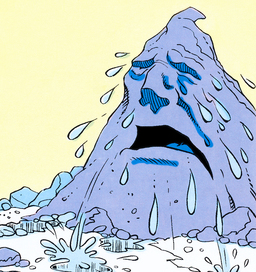 12) Mount Sorrow
Unfortunately, neither the Ewoks, the two kids nor Wilford Brimley are the worst things on Endor. That honor has to go to Mount Sorrow, the sentient, clinically depressed mountain from Marvel's Ewoks #7 comic, based on the godawful cartoon. The mountain cries tears that can cure anything, meaning Wicket and Princess Kneesaa need it to cure their friend Teebo, after contracting "the perilous laughing spell" from a "loonee bird" which makes him pull pranks on his fellow Ewoks (god, Ewoks was horrible). The mountain, being a depressed asshole, refuses to give Teebo his tears, and even tries to kill the young Ewoks by blowing them off his summit and sending them plummeting to their death. After Teebo manages to save his friends, the bipolar mountain immediately grants them his tears. Which is fitting, since every Star Wars fan who ever read this nightmare of a comic also shed tears.