Como Treinar o seu Dragão (How to Train your Dragon, 2010) 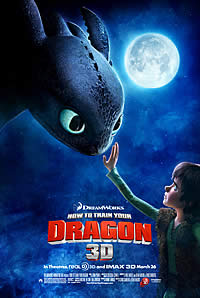 Do you know what time it is?

You'll be embraced by an

The story originally skewed younger and was less bold and epic-like until Chris Sanders and Dean DeBlois (Lilo & Stitch) took over as co-directors about halfway through. "Previous versions were heavily loyal to the book — sweet, whimsical and too small for Jeffrey's taste," says DeBlois, referring to studio chief Katzenberg.

Big-studio animated films typically take three to four years to pull together, but Canadian animator Dean DeBlois and his partner Chris Sanders were given just over 12 months to co-write and co-direct the 3-D Viking adventure, "How To Train Your Dragon."

The animated coming-of-age tale, about a scrawny Viking teen who befriends the fiercest dragon to ever beset his tiny village, had actually been wallowing in DreamWorks development for two to three years, says Sanders.

Unhappy with its direction, the studio hired the pair - who helmed the 2002 hit "Lilo & Stitch" - to do a complete overhaul, and deliver the film in 14 months.

Bad things with you...

Do you know what time it is?