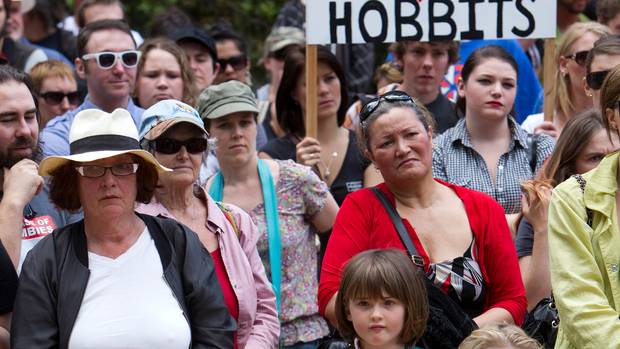 The Government will not repeal the "Hobbit law", which provoked street protests (pictured) in 2010 to keep filming for The Hobbit to stay in New Zealand. Photo / David Rowland
By: Derek Cheng

The Government will introduce a new law to allow film industry workers to collectively bargain from next year, but striking will be illegal and the "Hobbit" law will not be repealed.

Workplace Relations and Safety Minister Iain Lees-Galloway made the announcement today, saying that this option would benefit more workers than a straight repeal of the Hobbit law.

While the mechanisms - including the dispute resolution process and who exactly will be covered - are yet to be worked out in detail, it is hoped the new collective agreements will provide industry-wide standards.

Individual contracts will still be permitted, but would have to at least meet the minimum standards of the collective agreement.


New Zealand is considered a favourable place to make films, but the Government offers screen production grants to help tip the balance in a competitive global market.

Lees-Galloway said the Government's new law, which will be based on the recommended model of a cross-industry group, provided certainty and flexibility to the industry.

But the Government rejected the group's recommendation to expand the Hobbit law from the film and video games industries to all screen production work.

"The model will apply to screen production work such as on films, drama serials, commercials and video games," Lees-Galloway said.

"Its exact coverage will be determined during drafting in consultation with the industry."
Clique para ampliar...