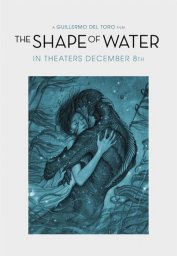 I am fire and air.

Usuário Premium
"‘The Shape of Water’ Wins the Golden Lion in Venice, a First for Guillermo del Toro"

Guillermo del Toro Explains How He Almost Shot ‘The Shape of Water’ In Black & White
Kevin Jagernauth
January 4, 2018 10:59 am

The fertile imagination of Guillermo del Toro perhaps gets no better display than in his dazzling “The Shape Of Water.” The romantic monster movie is a fantastical creature feature, against a Cold War thriller backdrop, that also acts a love letter to the movies. It’s a high wire feat, that looks like it costs tens upon tens of millions dollars, but actually came in under $20 million (after rebates). That would be a shoestring budget for anybody else, but del Toro did everything he could to have the latitude to execute his vision. At one point, he even considered making the film in black and white.

It’s hard to believe after watching “The Shape Of Water” that it could exist as anything but the colorful, gorgeously designed movie that it is. But speaking to The Wrap, del Toro explains how he pitched two different versions of the picture.

“[I financed the first round of creature design myself] because I wanted the freedom to go anywhere. I wanted to go to a studio with the design and the idea for the movie, and basically say, ‘You guys tell me how much you want me to do it for, and I’ll do it for that number. There will be no negotiation,’ ” he said. “I went to Fox Searchlight, and they said, ‘Under $20 million for color, under $17 for black and white.'”

Indeed, del Toro didn’t really know if his gambit would work, but he did believe that if it came down to it, “The Shape Of Water” would look just as lovely in black and white.

“That was honestly a battle I was expecting to lose. I was of two minds. On one hand I thought black and white would look luscious, but on the other hand, I thought it would look postmodern, like I was being reflective rather than immersed. It’s good, because it got me three million more,” the director said about this ultimate decision to go color.

In the end, the filmmaker created one of his finest works and one of the year’s best movies. “The Shape Of Water” is now playing in limited release.

The Return of Mrs. Caliban, the Cult-Favorite Novel Now Back in Print
The story of romance between a woman and a lizardman bears remarkable similarity to the new film The Shape of Water, and comes with a devoted fanbase all its own.
by ERIN VANDERHOOF
DECEMBER 1, 2017 4:00 PM

In the early 1990s, Blade Runner screenwriter Hampton Fancher went to work on a screenplay that told a very unusual kind of love story. Based on the slim novel Mrs. Caliban by Rachel Ingalls, it was about the love affair between Dorothy, a California housewife, and a 6’7” lizardman, who escapes from a laboratory after murdering his captors and takes refuge in her home.

“The book has a certain mystique to it; it’s eerie, it’s odd, and that’s up my alley,” Fancher said, remembering that he had never heard of the book when producers approached him to write the adaptation. He imagined the lizardman, Larry, as a fearsome and empowered creature, “like Jeff Bridges in Starman or Avatar.” And though usually he found screenwriting hard, on Dorothy and the Lizardman, “I was enjoying myself throughout the process.”

Dorothy and the Lizardman was never made. Even with a director attached, and a meeting with Harvey Weinstein, then at the peak of his Miramax-era power, the project fell apart. “Most movies aren’t made, and you never find out why,” Fancher said now. “They’re always looking for a way not to make a movie.”

But the story of love between a woman and a creature is finding new life in two different, utterly unexpected ways this fall. Guillermo del Toro’s new film, The Shape of Water, though not an adaptation of Mrs. Caliban, features a similar inter-species romance, tucked into a Cold War epic of espionage and hard-boiled eggs. And at the same time, Mrs. Caliban, for the first time in nearly 30 years, is back in print.

Though Fancher’s screenplay obtained notoriety of its own—a friend of Fancher’s mentioned that it is occasionally taught in a screenwriting class at the Columbia School of the Arts— the book has achieved legendary status. First published in 1982, it gained notoriety in 1986 when Britain’s Book Marketing Council featured it near the top of its list of the best American novels since World War II. Critics and writers like John Updike and Ursula Le Guin took notice of Ingalls, an American woman living abroad. The Los Angeles Times headline at the time: “Obscure U.S. Author Begins Storybook Life.” Despite the frisson of attention, the book fell out of print in the early 1990s, though it continued to spread quietly by word of mouth.

Until this week, that is. To celebrate a new release, by small press New Directions, Fancher attended an event at the SoHo bookstore McNally Jackson on Wednesday, alongside author Rivka Galchen, who wrote the introduction for the new edition, and Christine Smallwood, a critic who reviewed the book recently for Harper’s Magazine. It was like many McNally Jackson events, with the bookshelves containing the mysteries and Spanish books moved aside to make space, and an audience gathered in celebration. Unlike most of these events, the author, Rachel Ingalls, was not present—she lives in London, and besides, she doesn’t have e-mail.

The revival of Mrs. Caliban began more than a decade ago, with Galchen’s search for books to occupy her time while traveling. She realized that “98 percent” of her books were written by men, so she started combing through lists trying to learn of female authors she might not have heard of. “And I came across a list: Best English-Language Novels After World War II,” she said. “There were 100 novels, but I think only 1 of those novels was by a woman. And I thought, O.K., I’ll order it.“

As soon as she read it for the first time, she was hooked. She said, “As soon as I read Mrs. Caliban, I read it again, partially because it’s so short but also because it’s so intense—it’s almost like taking some strange pill.”

Her love for it persisted as she became a writer herself, publishing her first novel, Atmospheric Disturbances, in 2008. In her 2016 essay collection for the press, Little Labors, Galchen called Mrs. Caliban “a perfect novel,” in an essay about those lost women writers she discovered.

Even though it was a “throwaway line,” it piqued the interest of Tynan Kogane, an editor at New Directions. He remembers hearing about the book at a party, and keeping Rachel Ingalls’s name in his memory. “I ordered a copy on Amazon and fell in love with it,” he said. “I gave a copy to Barbara [Epler], the publisher of New Directions, and she loved it.” When they realized that the rights for the book were available, they pounced.

“Rachel—you can get the impression tonight—is a writer’s writer,” Kogane said, gesturing to the artsy crowd filing up the stairs. “We sent the books to all our friends, and other writers. This is such an odd book that seems to defy all the genres, and it’s not easy to classify in any way.”

Galchen thinks the book’s appeal lies in the fact that, despite its B-movie trappings, the book centers on a complex and flawed female character. “It’s a more complicated, nuanced take on the feminine position. It’s not an easy one,” she said. “Maybe it’s a good moment for a little complexity.”

Relax and have some winey